The Suffolk is a truly pure and unique breed that has been proven for over 200 years. The uniformity and hardiness of this breed maximizes the hybrid vigour of the progeny. The use of the Suffolk sire is preferred on maiden ewes and makes identification of cross bred lambs easier. The Suffolk breed is the most recognised breed worldwide. It is unsurpassed in eating quality and is considered the breed for the table. The black hard feet make sure that the Suffolk are built to go the distance. The early maturing lambs increase profits for prime lamb producers.

Handsome and hardy, happily hornless,
Prolific in twins, rarely born less,
Face and four legs as black as the devil,
The breast, back and loins all wide and level
Well covered in meat, of muscle no lack,
Legs of mutton well filled, tail level with back

4500BC Neolithic farmers take their livestock, including the Soay breed, to Britain. (Soays are small shedding sheep with hairy black/brown fleeces - still inhabit the St Kilda Islands of the Hebrides)

43 AD Romans occupied Britain and took with them their livestock, including some large, long-woolled sheep

1300's Brought another new breed - the Norfolk Horn, a descendant of the Soay

1600's Norfolks were crossed with Southdowns and originally known as Southdown Norfolks or Blackfaces.

1774 An agricultural writer said "It has been observed these (sheep) ought to be called the Suffolk breed, the mutton for the table has no superior in texture or grain, flavour, quantity and colour of gravy."

1810 Accepted as purebreds. The name Suffolk was used for the first time.

1886 The breed recognised by the English Royal Society 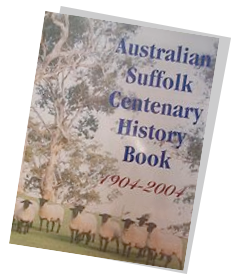